Get ready to be experience a full-on assault of the most exciting DIY cinema on the planet with guest hosts direct from Wakaliwood – the one-and-only Ugandan action studio!! Plus a live Skype to director Nabwana IGG and his kung fu commandos! 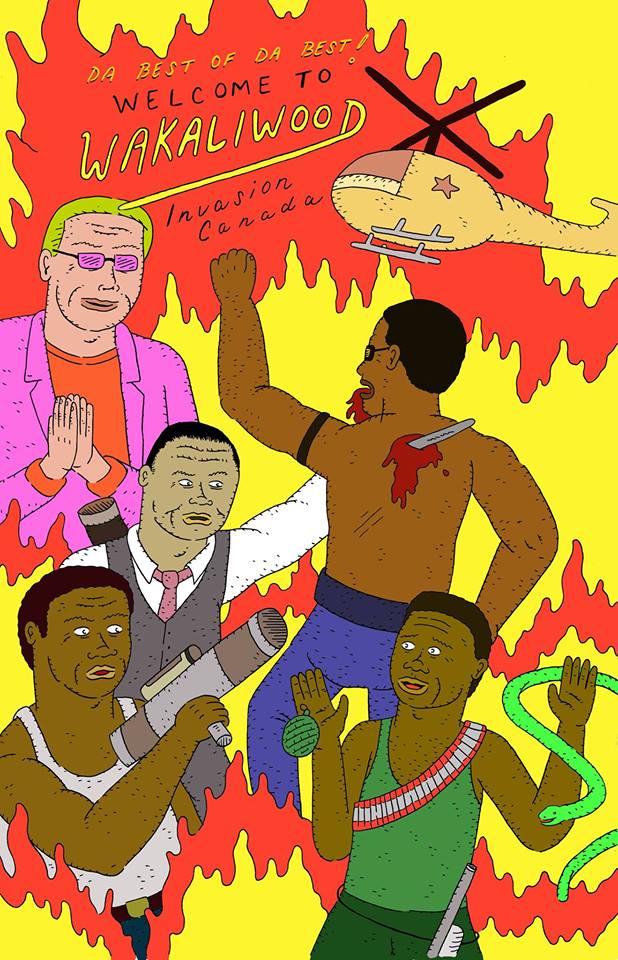 The Laser Blast Film Society is deliriously excited and proud to present an evening of Wakaliwood, the Ugandan action cinema movement that has taken the Internet by storm and is home to “da best of da best movies!”

As seen on VICE, CNN, BBC and in the pages of Fangoria (among many other publications), Wakaliwood has rocketed from obscurity to the forefront of off-the-grid DIY cinema. Under the guidance of writer/director/producer Nabwana IGG, this crack crew of self-taught filmmakers and kung fu gurus have made dozens of frenetically joyous action films in the ghetto outside Kampala, Uganda for budgets as high as $200 US.

With props, computers and gear all built from scrap parts (including a full size Huey helicopter!) and ludicrously cheap but awesome CG explosions, Wakaliwood has got more heart, grit and soul than 1000 Marvel flicks.

On Jan 13, 2016, for the first time in North America, a Wakaliwood representative, actor and producer Alan “Ssali” Hofmanis, will join the curators of the Royal Cinema's most eccentric film series in presenting a barrage of Ugandan action.

Headlining the program is an exclusive work-in-progress presentation of the upcoming Wakaliwood crime epic Bad Black, where Hofmanis, a mild-mannered doctor, is trained in the art of ass-kicking commando vengeance by a no nonsense ghetto kid to take on Uganda’s master thief. “It's a love story...” exclaims the film's narrator, “...the love of action!”).

The evening will also include extended previews of Wakaliwood titles, such as the all-kids kung fu saga The Crazy World and Operation Kakongoliro aka The Ugandan Expendables, as well as a special live-in-person appearance by Wakaliwood mascot Ebola Hunter AND a post-screening Skype Q&A with Wakaliwood auteur Nabwana IGG and his kung fu commandos.

This is a Laser Blast Film Society event you can't afford to miss!