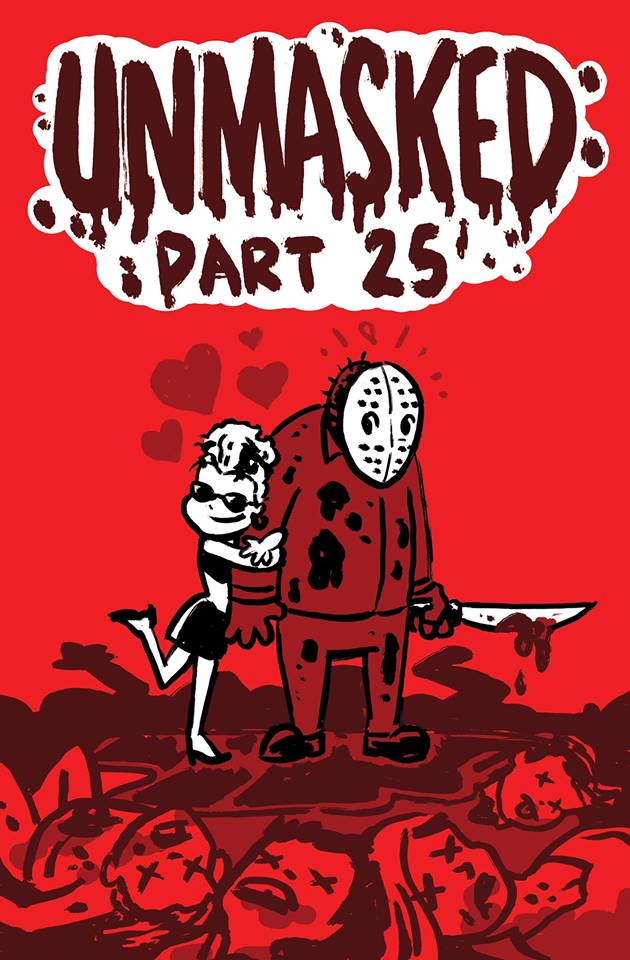 Jason—err... Jackson is one sad sack of a psycho-killer. Roaming the nooks and crannies of merry old England, having finally absconded from his overbearing mother in America, he has regretfully slipped back into the tedium of teenage slashing, and once more found himself under the thumb of an abusive parental figure – this time his abusive, and alcoholic Dickensian father.

All this maudlin monotony changes one night when Jackson stumbles across Shelly, a beautiful blind woman, who mistakes the killer for a late date.

Free of the fearful prejudices his Voorheesian visage typically evokes, Jackson finds in Shelly an opportunity for someone to truly appreciate his romantic and sensitive personality, as well as the motivation to finally shirk his murderous compulsions. If only Friday the 13th weren't so soon.

Unmasked Part 25 is a criminally obscure send-up of 80s slashers that remarkably marries sincere romantic sentiment with copious amounts of outrageous splatter without ever letting its parodic conceit wear thin, thanks in large part to the exceedingly earnestness of the production.

Director Anders Palm soaks Mark Cutforth's witty script in a pervasively gritty atmosphere that stands in stark contrast to the immediate silliness of the premise, while Gregory Cox's endearing portrayal of Jackson displays an impressive balance of sardonic humour and emotional pathos as his character ricochets between kill-sprees and performing soliloquy's by the likes of Byron and the Bard.

Despite the film's British cast and setting, UNMASKED: PART 25 was written and produced by a Canadian. Writer / Producer and Torontonian, Mark Cutforth, joined us at our Nov. 2014 screening and participated in a Q&A with Laser Blast curators Peter Kuplowsky and Justin Decloux. Read on to learn of the film's influences, its connections with the Hellraiser series, and Cutforth's plan to return to the horror genre.

Peter Kuplowsky: Let’s start at the beginning. How did this project come about? Did it begin with you, or was it always a collaborative effort between yourself and the director Anders Palm? Where did the idea come from?

Mark Cutforth: Anders and I met at NYU. I had the idea and I pitched him on it, and I didn’t expect it to come out quite the way it did, but I just started writing. We left NYU, we were able to raise some money, some tax-money available in Europe, and some other sources - a friend of his gave us some money to have a cameo. It was shoe-string, whatever we could do.

Justin Decloux: I was going to ask you how it ended up shooting in the UK - it’s a very British picture.

MC: Anders is Swedish, but he was residing in London. It just made the most sense to do it there, even though it was a very American genre.

PK: Was it always supposed to be a Friday the 13th riff? Or more of a general psychopath story.

MC: Always Friday the 13th. We thought we could get some money from investors, and we were so focused on an idea that we thought could make their money back and that [the slasher] was a good genre to pick. This idea was playing around in my head a lot as I watched everything - Evil Dead was very influential. I honestly didn’t know the genre that well at the time, but I watched Evil Dead 2 and it killed me - it was one of the funniest films I ever saw!

Another big influence on the main character [Jackson] was - if you’ve seen Andy Warhol’s Dracula: Udo Kier - you might see some similarities, the melancholy, the overall pathetic-ness of Udo. The director [Anders Palm] also really loved that film - it was playing a lot in New York at the time.

JD: While the film is very comedic, it’s also very violent and it’s a nasty violence. It’s grimy and dirty, was that always the intent?

MC: Not so much. I think what happened… see Anders was kind of a hands-off director and we were all sort of feeling our way through the shoot. We were young and just trying to do whatever we could to get it out there. I was also producing the film and the special FX guys that we were able to get ahold of happened to be doing Hellraiser 2. They came down and they loved the idea; loved the script. They were coming straight over from Hellraiser, so I think that made it much more... you know....

There was this sheet I had from the special fx guys with a list of all the kills from the film script. In the script I was just imitating and parodying Friday the 13th, but when I looked at their list: “shovel over the head 50 pounds; garrotting, throat cut, 30 pounds”. This whole list of all these kills they were generating with all the cost priced out - it was crazy stuff!

PK: You made another film with Anders afterwards - Murder Blues.

MC: We shot that in Toronto with Brad Douriff.

PK: Did that film get much of a release? I haven’t been able to come across it.

MC: Straight to video, but it helped having Brad. He was amazing. We were starting at that point to get some good actors, ones that didn’t get too over the top. Francesco Quinn was in that as well. It was alright.

PK: I’m still surprised that considering the popularity of the "Friday" films, this film or even Anders’ follow-up isn’t discussed more widely. Are there copyright concerns? How come it is so hard to come by?

MC: First of all it was a long time ago, and well… you move on. You make the film, it goes into distributor hands. It was sold internationally, it played in festivals and such, and you just move on. But in the last couples years its been resurfacing, people have been e-mailing, and now I have somebody who is really serious about re-releasing it. He’s looking at restoring the negative, and so I’m trying to get the negative back from the lab in London. Apparently its somewhere at Pinewood [Studios].

PK: Were you ever concerned about what the producers of Friday the 13th might think? In terms of hewing to close to their movies, especially with regards to designing the hockey mask. Did you have to tweak the design a specific way?

MC: We had the money and we just went at it - we didn’t think about it. It wasn’t until after when the distributors started coming in, and they started saying “oh my god - what are we gonna do with this” and you know… we really didn’t think about it. We were just having fun. I don’t even know how it got made really… I think we were concerned about legal issues, but it turned out to be kind of an inspiration, because the next Jason film was Jason Takes Manhattan.

PK: That’s right, though your character Jackson is in an urban environment for a lot longer than Jason is in Jason Takes Manhattan.

JD: Jason Takes Manhattan or Jason Takes A Boat as its also known. Do we have a question from the audience?

Audience #1: I loved it! It was fantastic! I was wondering about the music. Some of it would cut very specifically back and forth in a scene - were you considering the music while writing the script. I noticed that many of the songs in the credits were originals. Was that part of the writing process or did it come a little later.

MC: I played in bands growing up. I was very interested in the music scene at the time and this was a fluke: one of the actors - and I remember the day as if it were yesterday - one of the actors said they knew John King from Gang of Four. “John King! I LOVE GANG OF FOUR!” It was one of my favourite bands, and I gotta meet this guy. As soon as I met him I said, “Hey, can you do some stuff”, so the rock ‘n roll side of the film was a fluke. He came in, wrote a bunch of songs and it was a pleasure to meet one of my heroes growing up. It was very cool.

Audience #2: Why was the film retitled Unmasked: Part 25 from “Hand of Death"? Was the film marketed as a spoof, when the film is actually something different, something more than just a spoof - more serious.

MC: I understood the idea of changing the title in America. There was a Jackie Chan film called Hand of Death, so that didn’t work for them, but I hated the cover with the gauze and the funny teeth. That didn’t work for me at all. Steve [Manale]’s poster for this screening is really lovely.

JD: Let’s go back in time and put that poster on the box. 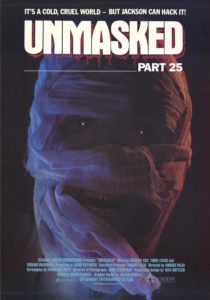 Audience #3: Can you talk about the set-design. I found it really interesting.

MC: Max Gottleib! He came up! Though you can see why a lot of people never worked again after this film.

PK: Well, the cinematographer John De Borman did a lot of films in the UK.

MC: John De Borman, yes. There I was watching The Full Monty - and oh my god - John shot this! Yes, so Max - who also production designed The Full Monty - and well we just talked and wanted it to be very street, very urban, of the moment and that was the kind of stuff that was going on at London at the time. The crazy get-ups with the wigs, and the clothes and on the design we just let everyone go nuts.

PK: We have another show that needs to be let in, so the last question we have for you is: What are you working on these days? And is Anders working on anything - he only made the two movies.

MC: Anders is a mystery man. He’s producer a little bit, I haven’t talked to him in a little while. I’ve talked to John [De Borman] once in awhile. Adrian Hough (Mick, who gets impaled on the wall) - he’s local in Toronto - I was concerned about telling him about tonight, because when I told him it might be released he went… “oh…” So I didn’t know if I should have invited him. But as far as a new project - yeah - we have a zombie film called: CHOO CHEW. It’s in pre-production and hopefully National Screen Institute is getting involved with it - we’re on Twitter (@ChooChewMovie). Come visit and watch this thing grow, a great writer’s involved - not me - I’m only producing. 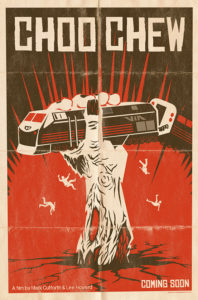