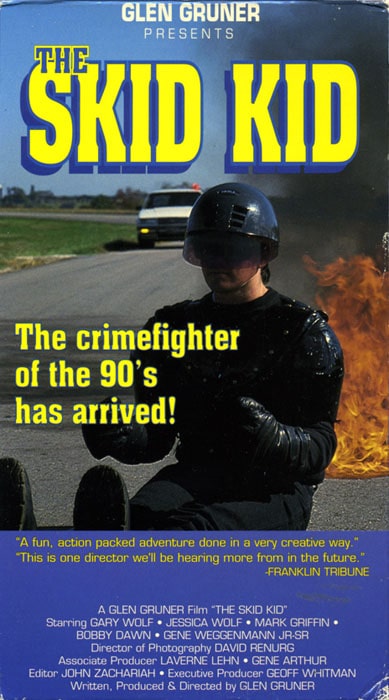 What's the essential elements you need to make a movie? Money? THINK AGAIN! First, try starry-eyed creativity, feverish passion, and the help of every single person in your hometown, especially if you plan to bring to life the story of a guy who scoots around on his butt.

Glen Gruner's 8mm classic The Skid Kid was shot in 1991, looks like it as shot in the late 70s and is a one of a kind treasure of teenagers pretending to fight, non-actors endearingly struggling with dialogue and sublime stop-motion super hero shenanigans.

The story deals with Scooter Spielberg (multiple actors, but largely Gary Wolf) who finds a pair of magical boots after its previous was burned alive(!), and they allow him to zoom around on his butt and save his fair city from all kinds of muggers, murderers and plain old bad dudes.

It’s the kind of lighthearted/baffling regional filmmaking magic that everyone needs in their life right now.

Barely released on VHS, this is a rare chance to see this marvellous testament to the creative spirit that may inspire you to move to what must be America's burgeoning new Hollywood: Union, Missouri.