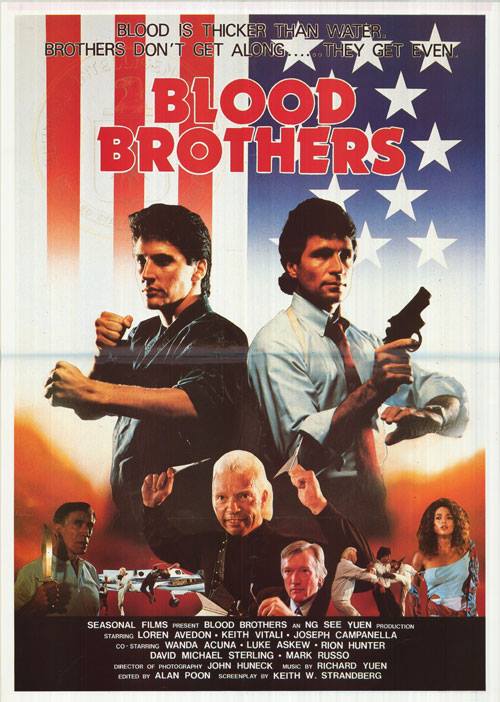 In the 90’s, Seasonal Films, the company that made Jackie Chan a star with SNAKE IN THE EAGLE'S SHADOW, had a brilliant idea: Make english language films in America that features the cutting edge action of Hong Kong Cinema. The results were films like NO RETREAT, NO SURRENDER (which gave us Van Damme) and SUPER FIGHTS (an early Laser Blast screening!), films that featured bone crunching stunts, insane falls, and actors that couldn’t deliver a line of dialogue to save their life... but they looked damn good when they went crashing through a table!

In Blood Brothers, two brothers (super kicker Keith Vitali and martial arts champion Loren Avedon) vow revenge after their father’s brutal execution by a white haired kung-fu killer. They team up with a martial arts gang (reminiscent of the loveable heroes of MIAMI CONNECTION), go undercover, and save the ENTIRE UNITED STATES!

It’s a film about family, forgiving mistakes, and kicking the ass of anyone that gets in your way. Choreographed by Tony Leung (no, not that one) the director of SUPER FIGHTS. Also known under the moniker NO RETREAT NO SURRENDER 3 (but unrelated to the previous two) BLOOD BROTHERS is Seasonal at the top of their game – riotously fun and nonstop in its dispensing of skillful fisticuffs.