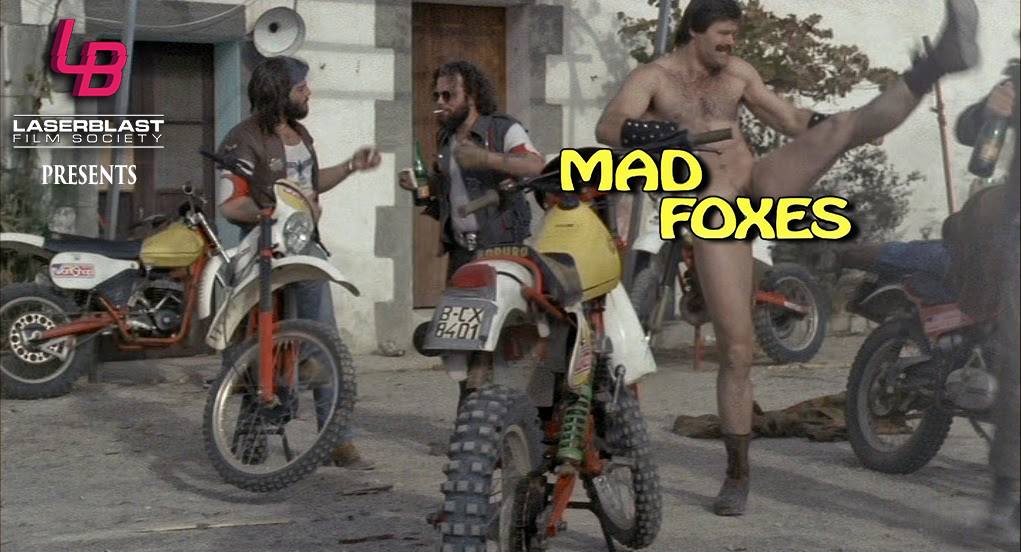 “Possibly the world’s best exploitation film... Such is the intensity of its power to entertain, based on its utter ineptitude.” - Kat Ellinger, The Gore Splattered Corner

Mad Foxes is the demented afterbirth of Swiss and Spanish filmmakers flailing wildly to create the most extreme exploitation film ever made and succeeding the way a drunk tumbles down a flight of stairs only to roll onto his feet and onto a slapstick rake.

It is as vile as it is hilarious, as inept as it is outrageous. It is a film to be both enjoyed and endured. It is the nadir of cinema, but so below the bottom that it paradoxically flirts with the medium's very pinnacle.

What begins as a traditional exploitation film revenge story, wherein a couple are brutally assaulted for inadvertently causing an accident that claims the life of a biker, escalates within the film's first 15 minutes into an all out war between a karate dojo and a Neo-Nazi motorcycle gang that culminates in castration and self-cannibalism.

From there, our “protagonist” - a reprehensibly sleazy casanova and target for the biker gang's ire - quite literally attempts to depart his own movie by absconding to the country to make-out with a hitchhiker in a bathtub of piss-stained water.

Alas, the MAD FOXES our hot on both his heels and the wheels of his super-cool sports car (that the producers were evidently adamant about insuring that it not get dented, scratched or remotely placed in significant danger).

This nigh-picaresque plot is buoyed not by the cinematography (which is garish), nor exciting action (which is clumsily executed), but instead by the most delirious English language dub to have ever been record.

The dialogue is an outright cacophony of improvised mumbles and pithy non-sequiturs, and when coupled with the genuinely shocking bright-red violence it depicts throughout its narrative's rapid ascent into pure lunacy, the cinematic alchemy achieved is truly a wonder to simultaneously adore and abhor.