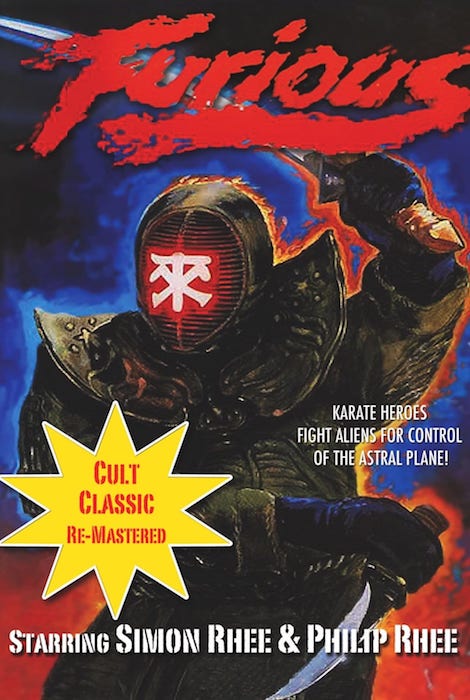 Although advertised as a martial arts adventure in which “heroes battle aliens from the Astral Plane for control of the universe” the true contents of FURIOUS are far, far stranger.

A martial artist wordlessly strikes out from his woodland abode to seek vengeance for his sister's death, but at the behest of his master is sent on a surrealist adventure that pits him against hordes of baddies, including an evil chef, a chicken-obsessed magician, and the director's own DEVO-esque punk band.

Shot over six days by a two man crew for the cost of 90 minutes of 35mm film stock, necessitating a strict 1:1 shooting ratio, and featuring a stolen Soviet-era score and credits from Star Trek II: The Wrath of Kahn, Tim Everitt's psychedelic kung fu debut is a fiercely independent work that both baffles and inspires.

Laser Blast scholars should also note that the film jump-started the career of PM Entertainment stunt experts Simon and Philip Rhree (The Best of the Best series) and Seasonal Films legend Loren Avedon (No Retreat, No Surrender 2, 3 & King of Kickboxers).