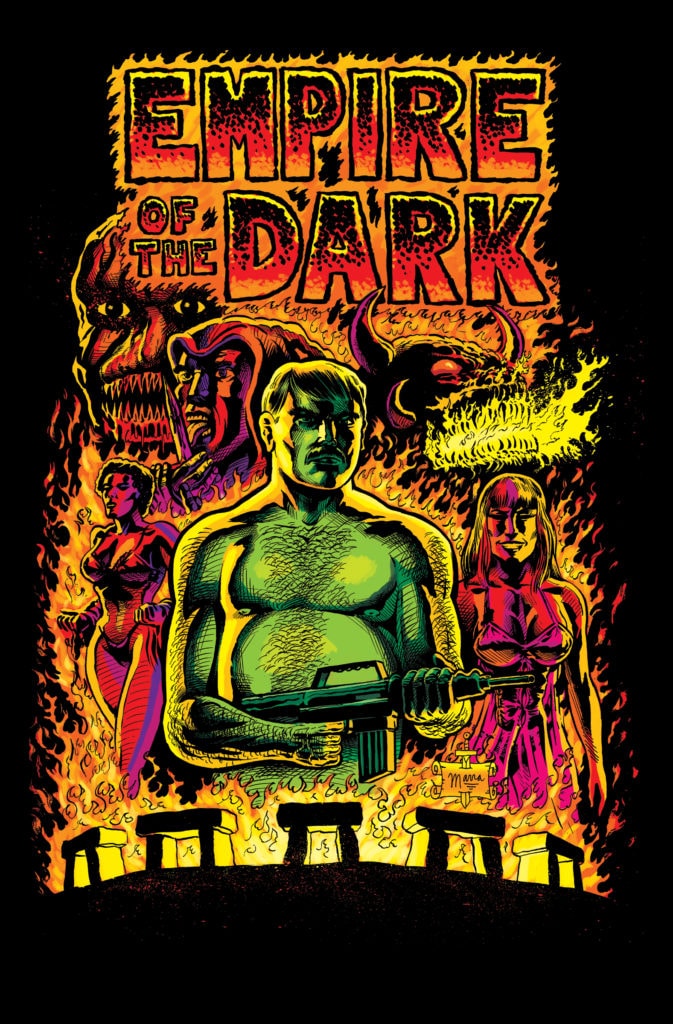 Twenty years after dispatching the cabal of satanists that sacrificed his girlfriend Angela (Tera Hendrickson), and nearly her newborn baby, bounty hunter beefcake Richard Flynn (Steve Barkett) is shocked to learn that the cult's leader Arkham (Godfrey Ho's muse Richard Harrison) has somehow survived and is now linked to a mysterious series of ritual killings perpetrated by what his latest gal-pal and ace-reporter is calling "The Demon Slasher".

Before long, Flynn finds himself teaming up with a hard-boiled cop and an enigmatic young man (played by the director's real-life son Christopher Barkett), as he descends into hell to battle the forces of evil. Unfortunately for Arkham and his minions, Flynn's grown a moustache and has taken fencing lessons; they don't have a prayer.

Empire of the Dark is a deranged passion project in the tradition of Laser Blast Film Society favourites like The Astrologer and Winterbeast. But where writer/director/editor/producer and star Steve Barkett fumbles with his amusing array of absurd dialogue, inexplicably manic editing, and his frankly unconvincing tough-guy persona, he audaciously succeeds with the film's visual panache, wisely employing an incredible roster of talented visual effects artists. Artists like Academy Award winner Robert Stromberg (Avatar, Maleficent), who conjures up a series of jaw-dropping matte paintings and miniatures throughout the film.

Enveloped by an exceedingly melodramatic and non-stop symphonic score, and peppered with delirious optical effects and endearing stop-motion monsters, Empire of the Dark is a trampoline of a movie, repeatedly reaching its ambition before hilariously tumbling down into sublime silliness.