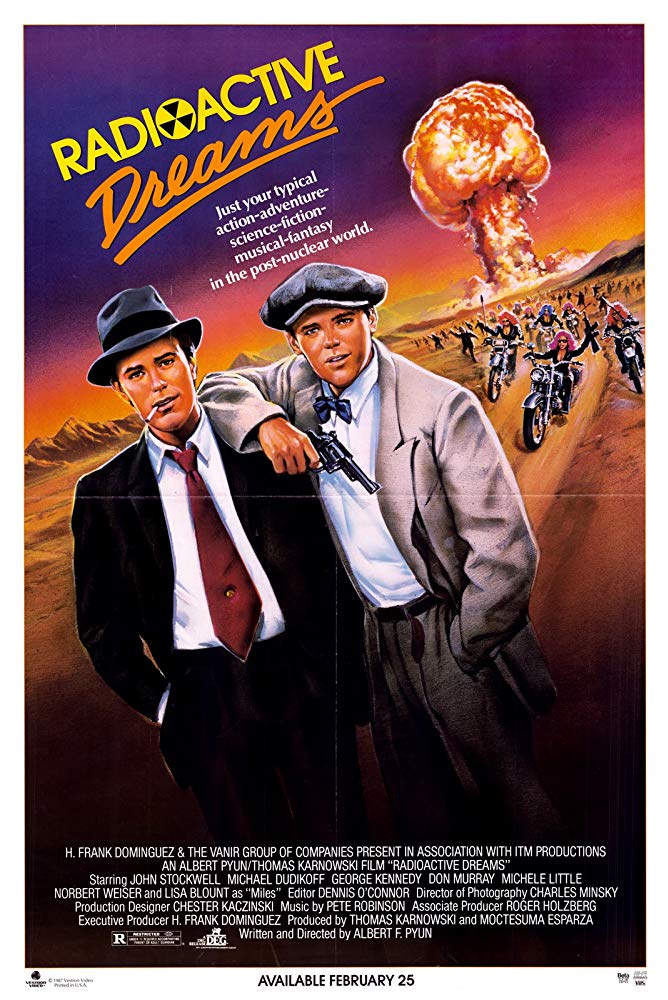 RADIOACTIVE DREAMS is a goofy 80s comedy, a post-apocalyptic adventure, a 40s detective pastiche and a musical all wrapped into one high concept package.

On the day the nuclear bombs drop, two boys are stuffed in a bunker by their fathers and abandoned. They grow up in their underground prison with only pulp novels to keep them company, so by the time they find a way out they've turned into two adults that go by the name Philip Chandler (Future KICKBOXER: RETALIATION director John Stockwell) and Marlowe Hammer (Mr. AMERICAN NINJA himself - Michael Dudikoff) who dream of being private eyes. They head out into the wasteland for the first time without any clue what may await them, but they have a slick car, nice suits, and the hope that they'll stumble onto some juicy mysteries. What's the worst that could happen to two clueless detectives running head-on into an irradiated world populated with murderous mutants?

RADIOACTIVE DREAMS is a blast of a motion picture - at once earnest, excited and surprisingly emotional. As the more excited of the two leads, Dudikoff is excellent in a comedic role that taps into an unseen vein of childlike glee. Stockwell gets to be the more serious, but that's only so he can do the hard-boiled narration. The supporting cast includes a gang of red-headed mutant bikers, a giant killer rat, two foul-mouthed kid assassins dressed like Elvis, and a spy looking for nuclear launch codes (Lisa Blount). Last but not least there's the third star of the film: An amazing fourteen song soundtrack made up of bands that all, but one, frontline women vocalists. The picture only drops the ball on the promise of being a road movie, because by the end of the first act, the film heads into an underground city and never steps out. Still, Pyun and cinematographer Charles Minski make the industrial look of the sets pop off the screen with a fantastic neon colour scheme.

The shooting of RADIOACTIVE DREAMS was hell for Albert Pyun. It was a complicated shoot with its ambitious locations, special effects, car chases, and musical numbers, but Pyun was prepared for all that. What he was not prepared for was the film's bond company stepping in to take over the production after they deemed Pyun's incapable of turning in the commercial product they had invested in.

What Pyun did or did not shoot is the subject of debate, but it's pretty self-evident that some sequences towards the end of the film suffer from a pedestrian "just finish it" execution. For a film set in a post-apocalyptic wilderness, the film gets pretty claustrophobic after its opening scenes, and most critics agreed that its likeable rapid-fire pace evaporates after the first act and the film grinds to a halt, before recovering for an infectious finale of pyrotechnics and dance numbers.

Despite its flaws, RADIOACTIVE DREAMS does not deserve to have fallen into obscurity. Its inspired soundtrack and brilliant visual energy alone warrant an HD restoration.

For more on this film and this filmmaker's remarkable career, check out Justin Decloux's vital book RADIOACTIVE DREAMS: The Cinema of Albert Pyun.